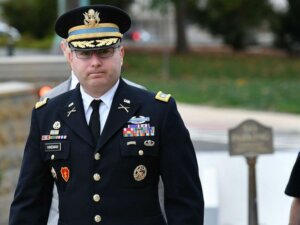 On the one hand, you have a decorated war hero who has served our country for two decades, Lt. Col. Alexander Vindman. Vindman has firsthand knowledge of the quid pro quo. Being a patriotic, principled military man, he voiced his concern up the food chain. Then you have the petulant child in the White House.

As we’ve all come to expect by now, the increasingly unhinged Twitter-addicted one tried to savage an American war hero who dares to speak truth to power. Likewise, being the lap dogs that they are, the talking heads on Fox News tried to disparage Vindman as well. Their argument? That because he was born in Ukraine and was a migrant from the Soviet Union at the ripe old age of three, Vindman’s motives for telling the truth must be questioned. Really! Forget his selfless dedication to his adopted country and to its principles. Forget that he received a Purple Heart in Iraq after suffering a hit from an IED.

This is yet another despicable chapter not so much for the bankruptcy expert; after all, we all know the foul-mouthed, intellectually-challenged 73-year-old will always find new lows in word and action. No, this despicable chapter is squarely on the shoulders of what is the vast majority of Republicans who still support him.