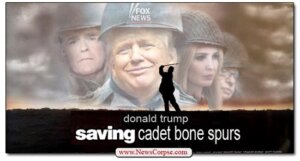 Cadet Bone Spurs found a way through his “bone spurs” many years ago to escape military duty. I don’t blame him for being scared; it’s a natural emotion when you might be placed in harm’s way. But his lack of support for the military in his younger years has transitioned into desecrating the very military he ran away from.

Get this. Against the advice of the Pentagon, Bone Spurs has pardoned war criminals. His reasoning, if you can call it that, is that we send people to war to kill and therefore can’t hold them accountable for any atrocity they might commit. Really, that’s his reasoning. Basically, he is saying there should be no military code of justice. He is saying to the courageous members of the military who stood up to expose atrocities that they don’t matter. Heaven help us.

Meanwhile, BS has been savaging a war hero in Lt. Col. Alexander Vindman. You see, to BS, the real atrocity is for someone to tell the truth and be faithful to the Constitution and the country. This is exactly what Vindman has done under unrelenting pressure by both BS and his willing cast of GOP enablers as he speaks truth to a lying power. This is so disgusting that even Liz Cheney can’t stomach it.

Once again, we normal independent Americans look at the Republicans, save a few such as Mitt Romney and John Kasich, and still are incredulous at just how anti-American and anti-democratic they really are. We in this group realize Democrats have had their sins as well, but there is now no qualitative and quantitative comparison to the depths Republicans have sunk.

I do not have a crystal ball as to the future of American politics and America, itself. But if the Democrats win across the board in 2020, it will be because Americans, who are not card-carrying Democrats, will have said NO to the moral and legal corruption of BS and anyone who has aligned themselves with him. Which is basically all but the entire party. Those of us swing voters who are nothing less than appalled and repulsed by BS will never forget his enablers. They have put their own self interest above and in conflict with our country and its principles. (Are you listening, Nikki?) To me, it’s the unpardonable sin. And I do mean unpardonable.

Postscript: In an extraordinary move, the Navy intends to oust Navy Seal Chief Petty Officer Edward Gallagher from the elite commando group just days after Trump cleared him. Amazing. Heartening that our military is so principled. Disturbing to the core that a commander in chief is so void of character and principle.