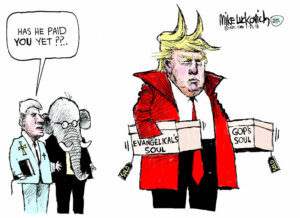 Yesterday, a respected voice of some white evangelicals finally spoke truth to power, calling for the removal of Trump from office. Where are all the others?

Counter-intuitively, a positive effect of the petulant child in the White House is that it has exposed the fraud of, it seems, the majority of white evangelicals. At the core of their professed belief is that Jesus is God and his life on this planet is the ultimate statement on how to live one’s life. His life was always transcendent, always about a humility in service to those weakest among us and, most importantly, about a life and consciousness beyond that of this world’s constraints. And so it has been quite telling that most white evangelicals have chosen a man to follow that is all but the absolute antithesis of Jesus, because it serves their worldly goals. Basically forever their entire brand has always been marketed as Jesus being their savior, to live as Christlike as possible. Really.

Being born and raised a Catholic with my major field of study being Theology, I have defended white evangelicals from the criticism by agnostics and atheists, as well as some believers in God. My point wasn’t that I agreed with all their views on political and social issues; this was immaterial. The point was that these were genuine individuals who found their peace and purpose through their Jesus and should be respected as such. Likewise, I always have thought that they were not only entitled but that they were compelled to seek legislation that they believed forwarded their view of Jesus’s life and meaning to all of humanity. If secular people can try and advance their dogmas, “religious” people should be able to do the same. And then it’s up to all the people of our Republic to decide.

But today white evangelicals rationalize away the means of evil to achieve their ends, which are many times not really much more than holding onto their power and status. i.e. the antithesis of their savior’s life. And that’s ok; white evangelicals can do whatever they want politically. But to, in action, mock the life of Jesus absolutely destroys any claim to what they profess their faith to be. It is beyond a fraud. It is desecration.