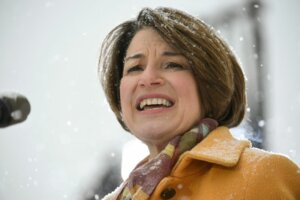 Been a terrible week for the country but….back in October of 2018, I wrote about Senator Amy Klobuchar, beseeching her to run. A month later, in November of that year, I published an insightful quote from the astute Ross Douthat of the New York Times, which stated that Klobuchar would be the candidate Trump would least like to face, an opinion that was mirrored by George Will, the principled and brilliant conservative columnist of the Washington Post. Then, another month later, I wrote, albeit prematurely, about her rise. But included in this article was the Democrats’ dream ticket. (More on that later.) Last October, after a long slog for Klobuchar, I wrote that her campaign was finally gaining some traction. That was then. This is now.

After a deceptively strong performance in the Iowa caucuses, just barely losing to Joe Biden, even though she was forced off the campaign trail due to the impeachment “trial”, Amy K came into New Hampshire tonight to debate her Democratic rivals. In the immortal words of the late great Dick Enberg, Oh, my! She was exceptional. And I wasn’t the only one who felt that way.

Not only did she win the debate on points, she did it by being herself…optimistic, unifying, extremely intelligent, funny. She has the ability to make her point without eviscerating her rivals. (She’ll keep Bernie’s Bros.) Cliche’ as it is, she’s Minnesota Nice, to a degree. She was the chief prosecuting attorney for Hennepin County (Minneapolis), which isn’t exactly a job for the meek.

Tonight she put the inexperienced Mayor Pete in his place by being honest. Mayor Pete loves to take shots at Washington, as if all of it and everyone in it is dysfunctional. Klobuchar pointed out her real results in an entire state (winning Red districts, including that of Michele Bachman’s), many times across party lines, and was frank about her anger with Mayor Pete’s “easy shots” at people trying their best in Washington. It was refreshing that Klobuchar found a way to respect Buttigieg’s service to the country but not to let this get in the way of real candor. In simplest terms, she’s a good person with a good brain and a good heart. And you do not want to mess with her. She suffers no fools. Think Kavanaugh hearing.

Here’s the deal. Rip up the playbook, Democrats. Don’t try to out-Trump Trump. Good-bye, Bernie. Joe Biden, a wonderful guy, but….please! Let. It. Go. Elizabeth Warren, she’ll knock ’em dead. In Massachusetts. And that’s about it. Mayor Pete is a smart guy, like the annoying kid in high school who had all the answers but little of the wisdom.

Amy K is the most revolutionary candidate in the race. She embraces her knowledge, experience and successes in Washington. She owns them. She doesn’t play that absurd “outsider” card. Nope, she’s been in the trenches, trying to get real results. She embraces unity, collegiality. Is there anything more anti-Trumpian than this? And unlike the current resident of the White House, she is brilliant. Humor, of which she has an abundance, always indicates intelligence and insight.

Lastly, and a bit off the radar, she and Joe Biden are the only Democratic candidates to not support abortion under all circumstances. Here’s why that makes a difference. Most Americans want abortion to be legal in the first trimester, some in the second trimester and almost no one in the third trimester. But the lemmings of the Democratic Party are scared to death of the abortion extremists. Sounds a lot like the Republicans who are scared to death of their dear leader. Principles take a back seat to what they perceive as survival. This issue is significant and most Democrats are alienating the reasonable middle.

What to make of tonight’s debate? Amy Klobuchar broke through. The people of New Hampshire, and their wonderfully independent souls, can send a message to the rest of the country that Amy K should be in the White House. “Oh, my!” Oh, yes, one other note..my earlier reference to the “dream ticket”. Amy Klobuchar/Sherrod Brown. Ohio loves Sherrod. This ticket would sweep the Midwest and Pennsylvania and might even win Texas. They’d not only win the election, they would crush.