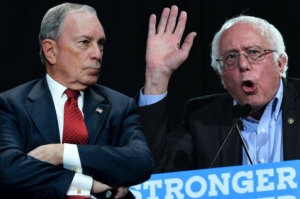 It is glaringly obvious that the majority of Democrats do no not want Bernie Sanders as their party’s nominee. This is not the same thing as simply being supportive of another candidate. These anti-Bernie Democrats see disaster in November with a self-avowed socialist whose support is only 30% of primary-voting Democrats backing him. Compare this to Trump’s 40% of support in all of America. Step in, Michael Bloomberg.

His hundreds of millions of dollars in an advertising buy has bought him a spot in the polls, which is amplified by the media necessarily having to report on this development. Likewise, the slapdown wrestlemania feel to the disdain Bloomberg and Trump have for each other is reality tv on steroids. So can Bloomberg be the Dems’ savior? I don’t believe so. If he is nominated, it’ll likely blow up the Democratic Party and pave the way for a Trump second term.

It is safe to say that Bernie Sanders will be apoplectic if Bloomberg gets the nomination. Imagine, a billionaire over Bernie! I mean, to Bernie’s Bros, Bloomberg is the antithesis of their hero. If Bloomberg wins the nomination, a substantial portion of the Bros will either sit out the election (being the aggrieved group that they are) or vote for Trump (that’ll show ’em!). They’ve done it before. Some of Bernie’s backers have the same emotional maturity as Trump’s; they crave emotional vindication over a reasoned view on how to move a complicated, nuanced country like America forward. Without Bernie’s guys supporting Bloomberg, Trump wins.

Beyond Bernie’s Bros, at this exact moment, it is premature to say that Bloomberg will play well as more people see him day in and day out. Think how Kamala Harris and Elizabeth Warren had their popularity erode the more exposure they received. On the opposite end of the spectrum, think of how Mayor Pete and Amy K are increasingly well liked as the campaign slogs on. This is a huge deal in a political process that can seem endless and leaves almost no detail of candidates free from the scrutiny of the public and the media. So how will Bloomberg fare as more and more people see more and more of him outside his tv commercials?

Will the Midwest and the West take to a New York billionaire with the personality of a DMV employee? Will blacks who don’t stand to gain politically from aligning themselves with Bloomberg, such as certain members of the Black Congressional Caucus, really fall into line with a former mayor who lauded “Stop and Frisk”, a program unabashedly aimed at black males 18 – 25 years of age? (I wonder if these folks want to have a conversation with the BCC?) Will voters take to a guy who skipped the microscope of campaigning in Iowa and New Hampshire?

One thing is undeniably true for the Democrats in November: As each candidate has her or his enthusiastic backers, some candidates alienate voters. Democrats can’t afford alienation. America can’t afford it. Bernie and Bloomberg are alienating.

Lastly, a Democratic glass of water would win New York and Vermont in November. Bloomberg and Sanders bring little to the table to win outside these states, especially in the absolutely essential Midwest. Over the next month, we’ll see if the Democrats get that.