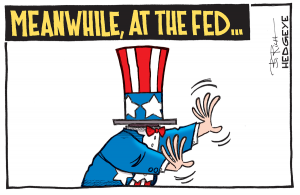 Remember when the the corrupt, inept one was boasting about the economy and the stock market, even though he had inherited them from Obama’s record eight-year stewardship? Remember, even with these endless boasts, when the corrupt, inept one still wanted more of a sugar high and intimidated the Fed to lower its benchmark interest rate? Remember when sane people said that this was an insane move when the economy was supposedly fine, making the valid case that the already low Fed rate needed to stay where it was, saving enough bullets for a rainy day?

Then the coronavirus hit and Trump pressured the Fed to drop the rate again, this time to .75%, as if this was an antidote for the virus, a virus that Trump had stated was a Democratic hoax. I.D.I.O.T. Following this move the markets dropped almost 10%.

But now the ultimate, the used-to-be independent Fed has caved to the pressure from the White House and dropped the rate to 0. What do the markets think? Well, as I write, the futures for the Dow and the S & P 500 have cratered almost 5%. Brilliant move by the Fed. It just keeps making things worse.

There are no bullets left in the Fed arsenal, except for the fangless quantitative easing. Have a nice day.