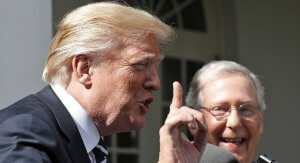 Ok, here we go with the next GOP spin of Trump’s catastrophic handling of the coronavirus crisis. According to Mitch McConnell, and I am not making this up, Trump failed in handling the coronavirus crisis because he was not capable of handling more than one item at a time. You see, poor Donald, Mitch says, was just so overwhelmed with impeachment his intellectual capacity was overloaded into paralysis. Further, McConnell scolds the Democrats for not being more gentle to the fragile ego and mind of his dear leader, who just happens to employ the senator’s wife.

Wow. Just wow. How pathetic is McConnell in continuing to cover for and enable Trump? Remember when Trump said he could shoot someone and not lose any voters? He was wrong. He could, in fact, cause not one but thousands of American deaths and not lose any voters. Deeply disturbing in its sickness. Is nothing sacred? Apparently not. Trump’s evangelicals told me so.