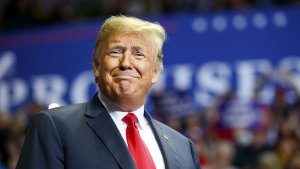 I see the disinfectant that knocks it out in a minute, one minute. And is there a way we can do something like that by injection inside, or almost a cleaning? Because you see it gets inside the lungs and it does a tremendous number on the lungs, so it would be interesting to check that.

From the petulant child in the White House

At first, Covid-19 was a hoax perpetrated by the Democrats and fake news. It will go away. Disappear. Someone forgot to tell what will be well over a million Americans who will have been infected by the disease. But at least Trump can claim the U.S. is #1…in terms of both Covid-19 cases and deaths, which have surpassed 50,000.

Then it was the magical hydroxychloroquine that was going to cure all. Until it wasn’t and instead began to endanger those who used it off-label. Oops.

But Trump’s statement yesterday, one in which he thinks it would be interesting to see if ingesting or injecting disinfectant could kill the virus, is the ultimate in ignorance and incompetence. And deadly. It is also downright frightening to see how many of his enablers will back the incoherent and false claim he made stating that he was being sarcastic and addressing reporters. In reality, he was speaking to health officials seated to his right. Look at the video. Sad. Very sad.