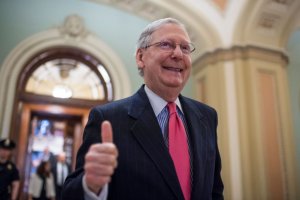 Mitch McConnell, Senate Majority Leader from Kentucky, has orchestrated his power game largely in the shadows. Yes, politicians and the media obviously know him very well. But to the vast majority of Americans he has been largely unknown. This has been especially true with the carnival barker in the White House sucking up all the oxygen in the electronic town square, which has been a perfect distraction for McConnell to maneuver behind the scenes. But he made a huge tactical error this week when he suggested states should go the bankruptcy route instead of being supported by federal money. “On stopping Blue State Bailouts” was how his office described McConnell’s tactic.

By his absurd and absolutely divisive initiative, McConnell demonstrated what some of us have known for years: he is morally bankrupt. Exactly why, Mitchey, should health care workers, policemen and other first responders be denied aid and support because they happen to live in states that have voted Democratic? McConnell is one, sick dude.

His wife, Elaine Chao, the Secretary of Transportation? Flight attendants have all but begged her to make it mandatory for passengers to wear masks. Even though health officials (and common sense) tell us this is what should happen, she can’t bring herself to do the right thing because it might offend her dear leader and business interests. Meanwhile, just as her dear leader did for weeks and weeks by delaying taking any action to stop the spread of Covid-19, Chao is placing people in harm’s way. Have they noticed that there are a million cases of Covid-19 in this country? Have they noticed that Covid-19 doesn’t stop at the border of Kentucky?

In fact, what’s ironic in McConnell’s ridiculous and dangerous thinking on Blue States declaring bankruptcy is that Kentucky receives much more in federal aid than it pays for. The opposite is true in many Blue States, such as New York, which pay out more than they receive in federal aid. So it seems McConnell is more than willing to secure a spot on the federal gravy train for his state, while denying basic fairness to others.

One might ask this sorry excuse for a leader just how he can justify a massive cash giveaway to corporations and the 1% in good times when he is now so calloused to provide for those most in need during the greatest catastrophe in the history of our country? McConnell embodies the very worst of the self-absorbed, myopic Republican Party. Thankfully, some Republicans have stepped up to mock and condemn McConnell’s latest travesty. This time, as people continue to suffer and die, this time the Trump-enabling McConnell will pay for his heartlessness come November.

It’s because McConnell just doesn’t get it. Back in the tumultuous ’60s, Stephen Stills penned the song, “For What It’s Worth”, which included the poignant line, “There’s something happening here. What it is ain’t exactly clear.”

Some Republicans, even if a minority within their party, get it. This time it’s different. This time the vast majority of Americans are afraid and in line for some major hurt, if indeed they haven’t already experienced it. This time it’s going to get worse before it gets better and it’s going to take years to get back to normal, if we actually do get back to normal. And Americans are going to wonder why they are suffering so much when CEOs and others of the rich and powerful are doing just fine, thank you very much. Why, Americans are going to increasingly ask, do the rich and corporations get the tax breaks and bailouts that secure their wealth and power? Why do they as Americans have to worry about having proper health care? Why do so many of those who have excellent health insurance want to gut the Affordable Care Act, legislation that allows millions of Americans to also have health insurance? Americans are going to wonder why about a lot of things. Indeed, something’s happening here. And it’s likely the end of the Party of McConnell and Trump. If we’re lucky, the Party of Lincoln will reemerge.