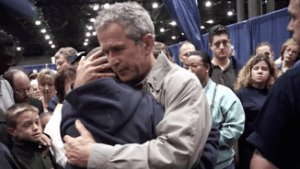 George W. Bush, in my opinion undeservedly so, has been pilloried throughout the years by the Democrats and by the Republicans. (Which makes me feel he got it just about right.) I remember Obama taking him to task (indirectly, of course) in his first inaugural address. I wonder if Obama would take back some of those self-righteous words that came before he became commander in chief? I know Michelle would want him to.

I think of the myopic Maureen Dowd of the New York Times (she, the ever so accepting one of Trump early on — good choice, Mo!) who has some vendetta against W, as she wrote about the look in his eyes as he was told the Twin Towers were going down, that somehow he was overwhelmed. Really? I thought he took it in stride as well as possible and didn’t scare the school children he was talking to at the time.

Here’s a photo from that moment…

Maureen Dowd and Donald Trump, and those they speak for, kinda deserve each other. They live in their closed, privileged worlds and spew hate when their realities are rocked. Then there is Gorge W. Bush.

No doubt, early on, he was way too full of himself. But he had a wife who called him on it. He grew. He is infinitely more interesting and complex than ideologues. He lives in that place most of us live: a gray area, where you’re just trying to be kind as you’re also trying to make sense of your life, your world.

Somehow liberals and Democrats just couldn’t stand to understand his humanity and compassion. They mocked his compassionate conservatism, as if these two terms were contradictory. He challenged both ends of the political spectrum with his, “soft bigotry of low expectations”. This was one of the most profound lines in political history. Ever. It said to the right, we have not done enough. To the left, it said you have to earn it by expecting it. Who can possibly disagree with this?

Somehow liberals and Democrats just didn’t care enough about saving the lives of millions of Africans because….because it was due to W’s massive initiative to defeat AIDs in a land that most Americans care not.

Somehow liberals and Democrats don’t want to remember one of the first actions W took after 9-11. It was his publicly inviting of Muslim clerics to join him. https://www.youtube.com/watch?v=liudIJFg8UQ

And now it is close to two decades later and W spoke again. He called for unity, empathy in this trying time. But, somehow, Trump took this as an affront…that somehow unifying people was an attack on him. And isn’t that the point? Unifying America does not serve Trump. And that is how sick he is as are his supporters. Enough.