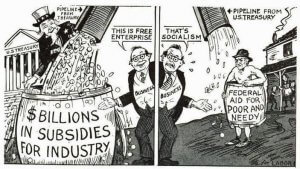 A few years back the GOP ran up the deficit with a huge cash giveaway to corporations and the 1%, this during a time of a healthy economy over which Obama had presided and handed off to Trump.

Whenever the stock market dropped or took a pause, Trump would excoriate Fed Chairman Powell for not lowering the Federal Funds Rate. So, well before the pandemic, the Fed began to lower rates.

Even when markets have been performing well, the Fed has kept the sugar high going for corporations. Basically, the market pretty much believes now there is no limit to the Fed’s generosity in providing credit to corporations.

The result of all of the above is a kid in a candy store environment for corporations. The underlying thought is that they are essential and therefore must have every advantage in remaining afloat. But what is also at play is the incessant favoring of one class over another. Specifically, large corporations (and their incredibly highly-compensated management teams) are always prioritized over individual employees or laid-off employees. Because of this, we have the bizarre and senseless pouring of money into zombie corporations and poorly-run corporations while tens of millions of Americans struggle to pay for food, much less health insurance.

Finally, with the pandemic stimulus bill, there was some relief for these Americans in terms of the PPP program and with supplemental weekly unemployment payments of $600 through July 31st. The extreme need for such payments exposed just how inadequate normal unemployment benefits are and how far too many of our brothers and sisters are living on the edge. Every day of their lives. But for many Republicans it is now sacrilege to consider extending these benefits beyond July 31st, as if there are jobs waiting for the millions out of work. The GOP considers it’s a disincentive to work. The reality is that the vast majority of people want to work; it’s not just a paycheck, it’s a part of their identity and self worth. But the Republicans, because there may be a small percentage of laid off workers who would rather stay on unemployment than work, want to axe the benefits of their fellow Americans in need. This is both heartless and ignorant.

It’s ignorant because these unemployment payments will be funneled right back into the economy, thus directly supporting all types of businesses. Contrast this with the Trump/GOP cash giveaway to corporations and the 1% a few years back. A substantial amount of corporate money went directly into their shareholders’ pockets, as opposed to being reinvested. The 1%? They already had enough money to spend on anything their hearts desired; their newfound money, in part, ended up sitting in their bank accounts, helping no one.

I am against socialism, especially the kind that runs rampant in our country. Runaway socialism for corporations and the 1% has been increasing exponentially over the past few decades. It has left us with a perverse reality: A billionaire can pay less tax than a low-paid employee because the former got to write the tax laws. But $600/week for Americans out of work is considered an anathema by most GOP lawmakers.