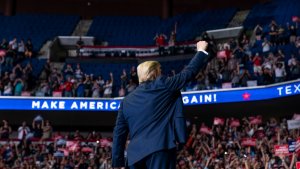 The petulant child’s campaign boasted earlier this week that there were 800,000 registrations for tonight’s rally in Tulsa. It was going to be such a large turnout that a special stage was constructed outside the BOK Center so dear leader could speak to a crowd of what was to be an expected crowd of at least 50,000. These 50,000 would be the people who could simply not get inside what was to be the stuffed 19,000-capacity arena for the main event. Then, a couple funny things happened: No one showed for the speech outside. And the moderately-sized BOK Center was nowhere near capacity, possibly in the 10,000 – 12,000 range in attendance.

This pathetic turnout mirrored Trump’s drop into the never-never land of polls…sub-40% approval rating. Now, of course, Trump and his lemmings are spinning this poor turnout as a reaction to all those terrible (peaceful) protesters. Yes, the gun-toting Trumpers were scared of sign-toting protesters, who just happened to be surrounded by law enforcement officers.

Here’s the reality. Tonight, we saw yet another glaring example of Trump’s incompetence. He hires untalented, ignorant and unqualified people. Over and over again. Think about this. What campaign staff and management would so tout such a large turnout and then have their boss look like a complete fool when no one showed up? What in the world were they thinking? They’ve got the database. They’ve got the money. How did they so blow this one?

That said, no doubt, Trump will blame, yet again, these people he has hired. He is not yet at the point where he’s finally willing to concede his getting crushed in November. But sometime soon, even with his huge ego, he will begin to realize he is toast, that he could be one of the biggest losers of all-time. The overly sensitive Cadet Bone Spurs may not have the guts to play that scenario out.

My hope is that his ego overpowers his limited intellect and he stays in the race. (Egomaniacs normally don’t need much to continue their insular narrative.) You see, if he stays in the race, then he could potentially bring down most Republicans with him. This country needs to be cleansed, not so much of Trump’s true believers, but rather those so power-hungry, so amoral, so cynical and so anti-American that they would put self before country. I’m talking McConnell, Graham, Rubio, Portman, Collins and the list goes on.

I also noticed one of the petulant child’s red meat statements tonight. He proclaimed that anyone burning an American flag should be sentenced to a year in prison. His ignorant, salivating followers loved it! But here’s the thing. The right of political expression, including flag burning, is settled law and has been for some time. Why? Because freedom of speech is the cornerstone of democracy and means real freedom. It means having the right to voice unpopular ideas. One simply can’t cherry-pick freedom; it has to be absolute.

I abhor much of what Trump says but not his right to say it. The bottom line is that our country has improved in time with the free flow of ideas, some of which were once unpopular, even condemned, only later to be vindicated.