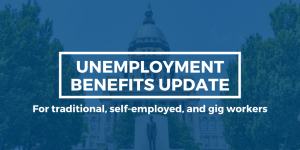 Ok, what am I missing? The country has massive unemployment. More than half the states are showing increased cases of Covid-19. Many states that seemingly opened too early are now considering going back to tighter restrictions. And even when these and other states had opened up, business was tepid. But there is a group of Republicans who want to slash or eliminate the supplemental $600/week unemployment payment once July 31st is upon us.

What could possibly be their rationale? Well, now that they’ve orchestrated the biggest cash giveaway to corporations and the 1% in the history of the United States via a massive tax break pre-pandemic, pre-meltdown of the economy, they have suddenly found religion again as budget hawks. This group always talks that game when low and middle income Americans stand to benefit.

Beyond their hypocrisy, they’re just not that smart. They claim the economy is coming back and therefore no new stimulus is needed. Idiots. Exactly what do they think prevented the economy from tanking? It was the additional billions of dollars paid to unemployed Americans as part of the massive stimulus bill, plus the multiplier effect of this money.

When July 31st rolls around and the $600/week in supplemental unemployment payments cease, the tens of millions of unemployed Americans won’t magically find work. No, instead they’ll be forced to drastically cut spending, including on essential items, drain whatever savings they may have and/or go into major debt. Meanwhile, the many companies that live or die by the business coming from this group will themselves be forced to take on major debt or close down altogether. It will be ugly. Members of the Federal Reserve Board know this, as do the vast majority of economists. But, again, there’s a faction of the GOP that simply refuses to deal with facts.

Here are the facts. All the stimulus money was intended to keep the economy afloat until we got past the pandemic and all its negative impact on businesses and individuals. The stimulus legislation had an arbitrary deadline of July 31st for the supplemental unemployment payments to expire. But just because there was an arbitrary deadline of July 31st obviously doesn’t mean the pandemic will be over. It will not be. The fact is recently half the states have had spikes in Covid-19 cases. During the summer! The summer was supposed to be inhospitable for the virus; the real danger coming in fall. Oh, well. I guess the virus didn’t get the message from the faux deficit hawks of the Republican Party.