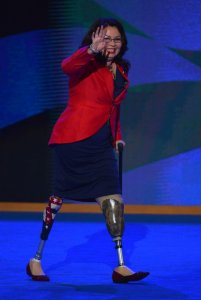 Joe Biden has the heaviest of weights in that he just has to beat Trump. Period. Therefore, his running mate just has to be the one that can maximize the vote for the ticket, while also being ready on Day 1 to be president.

This means it can’t be the VP front-runner Kamala Harris. She will not to be a net vote positive for Biden. There is nothing about her that will help in the key states of Michigan, Wisconsin, Ohio, Pennsylvania and Florida. She’s turned into the safe black woman pick for vice president. That type of calculation just doesn’t work. It is pedestrian and calculated. The same is true of Susan Rice, though exponentially so. She would be Kryptonite. Demings and Phillips too light to seriously be considered as president.

But as Biden was well ahead of the the curve when it came to gay marriage, he would be the same with the enlightened pick of Tammy Duckworth. She is a real veteran with real physical disabilities, – double amputee injury incurred during battle, a Purple Heart recipient born into poverty and yet soared, the first senator to give birth while in office. The real, authentic deal.

In addition to her extraordinary biography, her nomination as vice president would end the presidential race. Let’s hope the Dems get that. Just how does Cadet Bone Spurs run against a true American military hero? He can’t. No doubt he’d try to find a way to slur, just like he always has. But his talk is getting old to most. Time to turn the page.

Make no mistake, there is no perfection in our elected officials. That said, Joe Biden is a decent human being that has absorbed the deepest of personal pain and made the decision to carry on, to improve how we treat each other. What greater testimony could we ask of our leader?