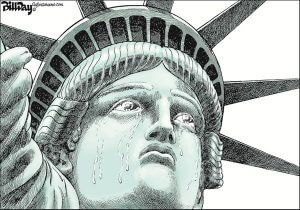 We Lost the Battle for the Republican Party’s Soul Long Ago
Only fear will motivate the party to change — the cold fear only defeat can bring.
By Stuart Stevens
Mr. Stevens is a Republican political consultant.
July 29, 2020
After Mitt Romney lost the 2012 presidential race, the Republican National Committee chairman, Reince Priebus, commissioned an
internal party study to examine why the party had won the popular vote only once since 1988.
The results of that so-called autopsy were fairly obvious: The party needed to appeal to more people of color, reach out to younger voters,
become more welcoming to women. Those conclusions were presented as not only a political necessity but also a moral mandate if the
Republican Party were to be a governing party in a rapidly changing America.
Then Donald Trump emerged and the party threw all those conclusions out the window with an almost audible sigh of relief: Thank God
we can win without pretending we really care about this stuff. That reaction was sadly predictable.
I spent decades working to elect Republicans, including Mr. Romney and four other presidential candidates, and I am here to bear
reluctant witness that Mr. Trump didn’t hijack the Republican Party. He is the logical conclusion of what the party became over the past
50 or so years, a natural product of the seeds of race-baiting, self-deception and anger that now dominate it. Hold Donald Trump up to a
mirror and that bulging, scowling orange face is today’s Republican Party.
I saw the warning signs but ignored them and chose to believe what I wanted to believe: The party wasn’t just a white grievance party;
there was still a big tent; the others guys were worse. Many of us in the party saw this dark side and told ourselves it was a recessive
gene. We were wrong. It turned out to be the dominant gene.
What is most telling is that the Republican Party actively embraced, supported, defended and now enthusiastically identifies with a man
who eagerly exploits the nation’s racial tensions. In our system, political parties should serve a circuit breaker function. The Republican
Party never pulled the switch.
Racism is the original sin of the modern Republican Party. While many Republicans today like to mourn the absence of an intellectual
voice like William Buckley, it is often overlooked that Mr. Buckley began his career as a racist defending segregation.
In the Richard Nixon White House, Pat Buchanan and Kevin Phillips wrote a re-election campaign memo headed “Dividing the
Democrats” in which they outlined what would come to be known as the Southern Strategy. It assumes there is little Republicans can do
to attract Black Americans and details a two-pronged strategy: Utilize Black support of Democrats to alienate white voters while trying
to decrease that support by sowing dissension within the Democratic Party.
That strategy has worked so well that it was copied by the Russians in their 2016 efforts to help elect Mr. Trump.
In the 2000 George W. Bush campaign, on which I worked, we acknowledged the failures of Republicans to attract significant nonwhite
support. When Mr. Bush called himself a “compassionate conservative,” some on the right attacked him, calling it an admission that
conservatism had not been compassionate. That was true; it had not been. Many of us believed we could steer the party to that “kinder,
gentler” place his father described. We were wrong.
Reading Mr. Bush’s 2000 acceptance speech at the Republican National Convention now is like stumbling across a document from a lost
civilization, with its calls for humility, service and compassion. That message couldn’t attract 20 percent in a Republican presidential
primary today. If there really was a battle for the soul of the Republican Party, we lost.
There is a collective blame to be shared by those of us who have created the modern Republican Party that has so egregiously betrayed
the principles it claimed to represent. My j’accuse is against us all, not a few individuals who were the most egregious.
How did this happen? How do you abandon deeply held beliefs about character, personal responsibility, foreign policy and the national
debt in a matter of months? You don’t. The obvious answer is those beliefs weren’t deeply held. What others and I thought were bedrock
values turned out to be mere marketing slogans easily replaced. I feel like the guy working for Bernie Madoff who thought they were
actually beating the market.
Mr. Trump has served a useful purpose by exposing the deep flaws of a major American political party. Like a heavy truck driven over a
bridge on the edge of failure, he has made it impossible to ignore the long-developing fault lines of the Republican Party. A party rooted in
decency and values does not embrace the anger that Mr. Trump peddles as patriotism.
This collapse of a major political party as a moral governing force is unlike anything we have seen in modern American politics. The
closest parallel is the demise of the Communist Party in the Soviet Union, when the dissonance between what the party said it stood for
and what citizens actually experienced was so great that it was unsustainable.
This election should signal a day of reckoning for the party and all who claim it as a political identity. Will it? I’ve given up hope that there
are any lines of decency or normalcy that once crossed would move Republican leaders to act as if they took their oath of office more
seriously than their allegiance to party. Only fear will motivate the party to change — the cold fear only defeat can bring.
That defeat is looming. Will it bring desperately needed change to the Republican Party? I’d like to say I’m hopeful. But that would be a lie
and there have been too many lies for too long.

And then there’s this from the most prominent conservative voice of our times,George Will. Biden’s election will end national nightmare 2.0.

Moments after becoming president on Aug. 9, 1974, Gerald Ford said, “Our long national nightmare is over.” Having served a quarter-century in Congress, he understood that presidents are to “take care” that laws produced by the first branch of government are “faithfully executed.” The nation in 1974 was eager for a collegial respite from the gladiatorial strife that had consumed the country during urban disorders and the Watergate stew of scandals.
Joe Biden’s election will end national nightmare 2.0, the nation’s second domestic debacle in two generations. Hell, Thomas Hobbes supposedly said, is truth seen too late, and in 2020, the nation, having seen it in the nick of time, will select for the Oval Office someone who, having served 36 years 16 blocks to the east, knows this:
A complex nation cannot be governed well without the lubricating conciliations of a healthy legislative life.
Biden won the Democrats’ nomination by soundly defeating rivals who favored —or, pandering, said they favored — a number of niche fixations (e.g., abolishing ICE, defunding police). He clinched his nomination earlier and easier than did the recent intensely contested nomination
competitions (Barack Obama against Hillary Clinton in 2008; Clinton against
Bernie Sanders in 2016).
Biden does not endorse Medicare-for-all: He understands, as some competitors for the nomination amazingly did not, that for several decades organized labor’s most important agenda has been negotiating employer-provided health care as untaxed compensation. Similarly, Biden does not oppose fracking, which provides many of the more than 300,000 Pennsylvania jobs supported by the oil and gas industry, and many others in Ohio and elsewhere. He understands, as some progressives
seem not to, that presidential elections are won not by pleasing the most intense faction but by assembling a temperate coalition.
Biden has not endorsed packing the Supreme Court: When President Franklin D. Roosevelt, after carrying 46 of 48 states in 1936, tried that maneuver, the blowback in the 1938 congressional elections erased his liberal legislating majority in Congress, and coalitions of conservative (mostly Southern) Democrats and Republicans prevailed until President Lyndon B. Johnson’s 1964 landslide produced a liberal congressional majority — briefly.
Biden came to the Senate eight years later, in the aftermath. In 1965 and 1966,Democrats wielding lopsided congressional majorities (295 to 140 in the House, 68 to 32 in the Senate) had lunged beyond majority public opinion. Voters’ retribution included Republican victories in five of the next six presidential elections. Also,Biden was vice president in 2010 when the electorate, after just two years of unified government under Democrats, ended it.
One of Biden’s closest confidants, who has an agreeable preference for anonymity, says that Biden was initially ambivalent about seeking the 2020 nomination but “Charlottesville put him over the edge.” The confidant refers to the violence provoked by the August 2017 anti-Semitic demonstrators, and to President Trump’s assessment that there were “very fine people on both sides.”
The confidant calls Biden “a relief pitcher — he’s warming up in the bullpen right now,” preparing an administration with “a broad array of people.” The confidant recommends taking seriously Biden’s campaign’s slogan “Build Back Better.” The“Back” acknowledges the national desire for reassurance “that the world as they know it is recoverable.”
Many of Trump’s current campaign ads portray a dark, fraying America. They evoke the “hellhole” America that he described in 2015 that presaged his inaugural address reference to “American carnage.” Biden’s optimistic ads suggest that although it is not now, it soon could again be, “morning in America.”
Trump apologists say that before covid-19, all was well. “All” means only economic metrics: An American is supposedly Homo economicus, interested only in consumption, to the exclusion of civic culture. And never mind a pre-pandemic $1 trillion deficit — at full employment.
Such apologists insist that Democratic administrations jeopardize prosperity. So, these apologists are not merely projecting their one-dimensional selves onto their more well-rounded compatriots, they are ignoring 120 years of inconvenient data(as noted by Jeff Sommer in the New York Times): “Since 1900 the stock market has fared far better under Democratic presidents, with a 6.7 percent annualized return for the Dow Jones industrial average compared with just 3.5 percent under
Republicans.”
Richard M. Nixon’s “imperial presidency” included Ruritanian White House
uniforms, which did not survive nationwide snickering. Ford’s presidential modesty produced reports of something that was remarkable only because it was remarked upon: At breakfast, Ford popped his own English muffins into the presidential toaster. Forty-six years later, an exhausted nation is again eager for manifestations of presidential normality.