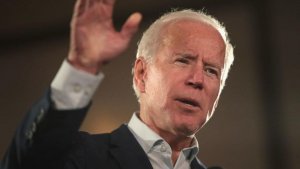 Time for we nail biters to let go of some horrific November 3rd scenarios, as if something is going to pop up to totally derail the Biden campaign or to boost the petulant child. Seriously, what in the world could Biden have ever done that would rival the endless disgraces of Trump?

Let’s review some of the facts. It’s not some sensational revelation that captures the public’s imagination, but the fact is Trump has blown through a ton of money with no positive impact. Meanwhile, the Biden campaign had a huge haul of cash (about $350 million) of late, which places his campaign in much better shape than Trump’s. Added to this, Biden is and has been ahead by close to double digits for…forever.

Another fact. The guy who, in public, said the coronavirus was a hoax and would magically disappear, has now been recorded saying how deadly the virus was. 200,000 dead Americans. The U.S. with the highest rate of deaths anywhere on the planet. Good job, Donny. Idiot.

Another fact. The only thing that has propped up the economy, since the pandemic, was a massive stimulus bill of $3 trillion. But now the Republicans have decided they’re suddenly deficit hawks. (Where were they when they passed, in good times, the largest cash giveaway to the 1%? But, God forbid, some struggling mom gets food stamps.) The irony of this is that it seems the GOP powers that be have decided Trump is beyond saving and it’s time to protect themselves. In short, by not passing a stimulus bill that can buoy the economy, to say nothing of the Americans on the fringes just trying to find shelter and food, they seem to be cementing an eroding economy. As this crushes Trump, the newfound frugality may help Republicans in given states. But, maybe not. Just maybe they should have stepped up and actually helped the huge number of Americans in need. Probably the greatest asset for Democrats going into November is just how extremely tone-deaf Republicans are.

We’ll find out in about 50 days. Are we a scared nation that fears competition, fears peoples from other lands choosing to make America their own?

My guess is that we’ve had enough of the drama, the lies, the unrest. Before Trump, it seemed we could disagree without brandishing arms. It seemed immigrants were always (tragically so) put through a hazing to prove they belonged, and, in time, accepted. This, beyond everything else, is what got us to where we are today.

In case anyone forgot, we are a bunch of searching mutts in this country, trying to find a better way. We are not enemies of each other, we are each other’s lifeblood. This will prevail.