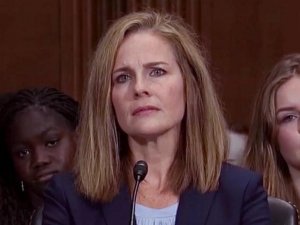 Many years ago, as I was pursing my undergraduate degree at a Jesuit university with a major in Theology, one of the earliest and most prominent lessons taught was that concerning situational ethics. In simplest terms, it’s pretty much that the end does not justify the means; the means have to be moral and ethical unto themselves. It is a core teaching of Catholicism.

It’s a difficult bar to clear. But that’s the point. Jesus, as the ultimate catalyst for the formation of the Catholic Church, was unambiguous about living a life of Truth. No short cuts around ethics and love. Humility. Service to the least among us. The sanctity of all lives.

Amy Coney Barrett, a devout Catholic and thus a believer in Jesus and his teachings, might be a fine person in many ways. Her family includes two adopted children from Haiti and another with Down Syndrome. It has also been reported that she is indeed humble and giving in many ways, that she is respected and admired by many who are on the opposite end of the political spectrum. In short, she has walked the walk. (Democrats better tread lightly in their personal criticism of her.) But in a spiritual and moral sense, her exemplary personal life does not consecrate her current decision to accept the nomination from a man who is the antithesis of Jesus, a man who has gained power and money via unethical and immoral acts, a man who today pits neighbor versus neighbor for his own personal gain. It is also being willfully blind to the double standard the Republicans have displayed with the Supreme Court.

Amy Coney Barret knows she is practicing situational ethics by accepting Trump’s nomination of her to the Supreme Court. If by some chance she actually doesn’t know this, it means she has rationalized away a core tenet of Jesus’s life. Either way, Barrett is failing Ethics 101 not unlike so many evangelicals who have embraced a man of evil ways for their own secular, worldly ends.