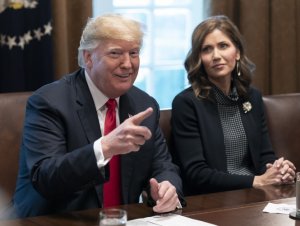 There is only (Kristi) Noem doubt about it that South Dakota is getting pummeled by Covid-19. According to the Associated Press, South Dakota had a record-breaking number of Covid-19 deaths in the month of September with 56. But that record looks like it’s going to be well back in the rearview mirror as South Dakota has already registered 54 deaths in the first nine days of October. Still, South Dakota Governor Kristi Noem, stealing a page from Donald Trump’s playbook, is criticizing the accurate reporting of these deaths instead of owning her fatal missteps.

Noem is the same governor who inexplicably promoted a mammoth August motorcycle rally in Sturgis, South Dakota, that predictably turned into a Covid-19 super-spreader event. It certainly seems that she and the Donald are in lockstep when it comes to sacrificing some American souls in pursuit of their political ambition. In Noem’s case, she obviously has her sights set on something bigger than representing the less than the 900,000 residents of South Dakota.

Ironically, just as Noem is now in a full-Donald embrace, the country, including even a substantial portion of the GOP, are headed in the exact opposite direction. For this, we should be thankful of Trump. In a normal time, Kristi Noem would have seemed, well, normal. But not today. She has killer instincts in all the wrong ways.