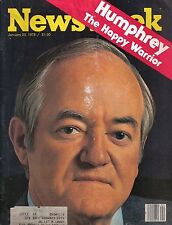 In 1968, Hubert Humphrey was many times derided for being an optimistic leader…”the Happy Warrior.”

1968. 1968, a year when Martin Luther King, Jr. and Bobby Kennedy were gunned down; a year when the war in Vietnam continued, costing tens of thousands of lives; a year when city streets were on fire with protest and violence, a year when my beloved city, Chicago, was the backdrop for the Gestapo tactics of the Chicago Police during the Democratic convention.

Hubert Humphrey, a native son of the usually forward-thinking Minnesota, and one of the earliest and strongest advocates for civil rights. He saw and felt the promise of America. But it was not to be. America chose Humphrey’s opposite: Richard Nixon. Barely. But four years later American voters doubled-down and promoted Nixon to king. Nixon crushed war veteran, anti-war candidate George McGovern by over 20%. Nixon won every state except Massachusetts.

That was then and this is now. There has been one happy warrior since 2018 and his name is Joe Biden. When most of his Democratic Party, totally sickened by Trump, decided that radical, opponent-slashing was the way, Biden saw another path. His entire life life was built upon the Catholic ethic of community. For all. So it was not surprising that he was not willing to throw everyone who disagreed with him under the bus. He was mocked by many in his party. But today it certainly seems the collective American knows better.

About a week out from the final day of voting, it is projected that as many as 100-million Americans will have already voted before November 3rd and incredibly disproportionately for Democrats. I predicted that 150-million would vote this election. In 2016, the total was just 136-million. That means an almost unfathomable 10% more Americans will vote this year. That. Is. Terrible. News. For. Trump. It is insanely good news for our country.

There was a large number of Democrats who voted for Reagan. They trusted him and his joyous view of the American future. Biden has won back this group for the Democrats. Fitting. We go forward together. Or not at all. Happy Warriors.