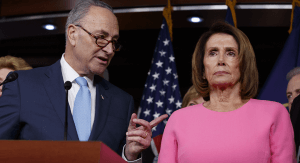 With less than ten days until Trump’s term is over and he exits the White House, it seems scores of Democratic politicians want to impeach him. This is insanity.

First, at best, impeachment would only be a symbolic action; there is absolutely no way Trump would ever be convicted. Remember, 60 senators need to vote to convict. That’s not going to happen, especially when the vote would take place after Trump was out of office.

Impeachment will simply make Trump a victim, rile up his rabid base and provide an excuse for his cowardly GOP enablers to keep enabling. Even more damaging is that this will place yet another extreme burden on President Biden as he takes on massive challenges. Biden’s best shot at being successful is bringing people together. Impeachment does the opposite.

Because of what materialized in Georgia Senate races this past week, the Democrats have control, but just narrowly, of the House and Senate. With Biden in the White House, the Democrats have an opportunity to enact meaningful legislation. But they’ll only be able to do this with support from sane and patriotic Republicans.

In case the Democrats hadn’t noticed, this number of sane and patriotic Republicans is limited…the majority of Republican congressmen wanted to block the certification of Joe Biden as president. Likewise, once one gets beyond Romney, Sasse, Murkowski and Toomey, we’re left with a group of Republican senators that is a sorry mix of true believers in Trump plus the dozens of others who cowardly enabled him for four years. Into this reality the Democrats want to impeach?!

I have spent four years seething in anger at how Republicans placed their own (mainly cowardly) self interest over our country. If the Democrats move to impeach, they’ll be doing the same thing. Time now for the Democrats to lose their obsession with the evil of Trump; he is disgraced and will be out of office in a few days. And then he’ll be spending a lot of time in court trying to stay out of prison. After his numerous defeats in court over the past two months, the petulant child knows the real end is near. So Democrats, do not give Trump any more oxygen. Put out the fire. Stop the insanity of impeachment. Now. Do it for Joe. Do it for the country. Time to govern.