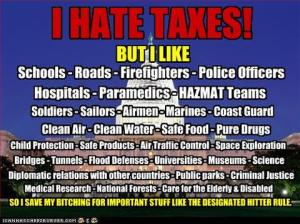 And so it goes. Corporations that are called American by its CEOs, and that are beneficiaries of all those American services and infrastructure others are paying taxes for, are avoiding billions of dollars in taxes by inversion….setting up corporate headquarters in other countries where tax rates are more favorable.

Before we all sound too holier than thou in condemning these CEOs and their corporations, I wonder how many of us would do the same if we could. I’m not a big believer that the little guy is inherently more honest than the big boys and girls who pocket the seven, eight and nine-figure paydays. But I am a big believer that the latter group is expert at setting up and gaming systems. And no profit is too big.

In case anyone hasn’t noticed, stock prices have more than doubled in the past few years. And yet our American CEOs manage to maintain a straight face as they sing the blues of how corporate taxes are killing them, making them completely uncompetitive in the rest of the world. It’s just a disaster, I tell you.

Maybe because of the financial Armageddon, we’ve all lost our virginity when it comes to what people will do to make and protect their money. I think we all know that CEOs can be just better-dressed, slicker used car salesmen. We can see burglars and thieves that are morally superior to some bankers. And we can all look in the mirror to see the hedges we take and compromises we make when presented the opportunity. But the point here is that basic tax evasion has been legally institutionalized for corporate America. And since there is obviously no shame to change behavior, laws must.